Join me for a walking tour near Edinburgh if you are looking for things to do. Visit Dunfermline or South Queensferry, both easily reached with excellent transport connections to Edinburgh. Whilst one is inland with a great parkland, the other wows with seaside and both towns are great for children too. 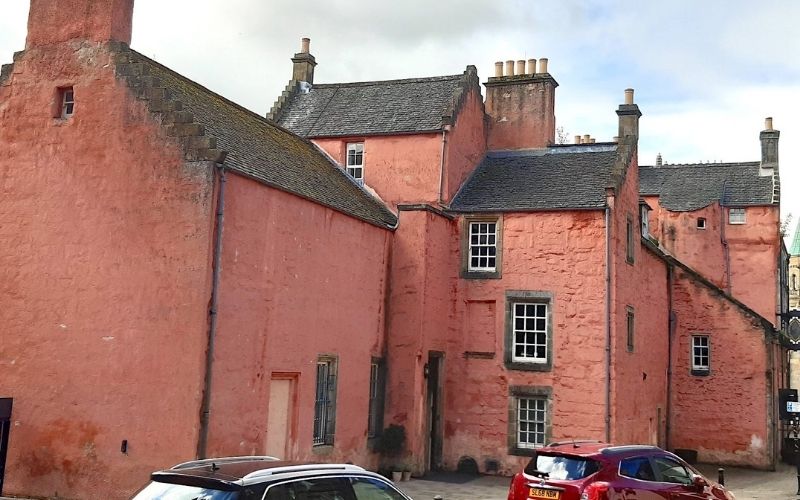 Enjoy a walk near Edinburgh but make this a day for all the family – ruins of castles, a Norman Abbey Church, the tombs of kings like Robert the Bruce and more. Visit the wonderful Pittencrieff Park for play and relaxing walks in formal gardens and a woodland valley. You may want to discover Andrew Carnegie’s life that began in Dunfermline or see where “Braveheart” stopped to refresh himself. 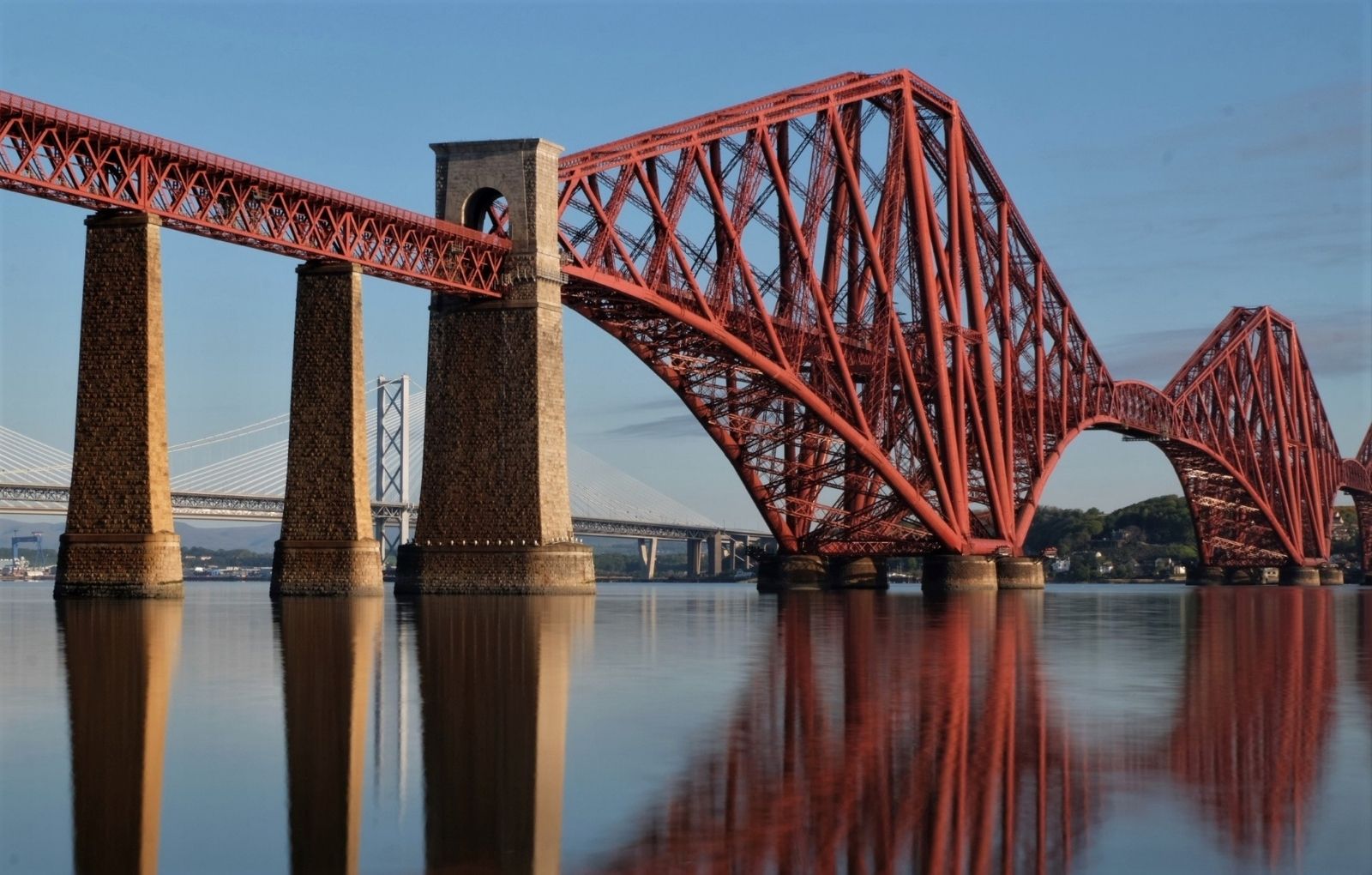 A walking tour close to Edinburgh and easily accessible. A popular place for walks on the beach or along the promenade – admire the unique view of the three bridges across the Firth of Forth. For boat fans there is the marina and the old harbour – or you may just enjoy the charm of this town with its countless eateries and artisan shops. You find out the story beyond – like the Burryman story. 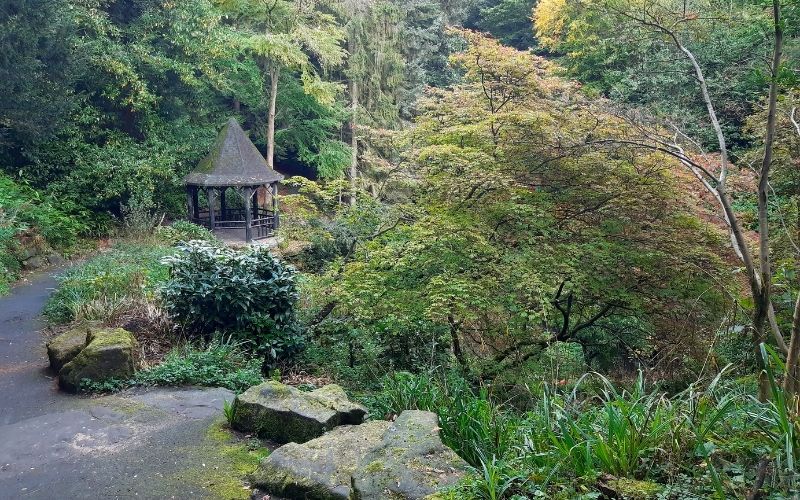 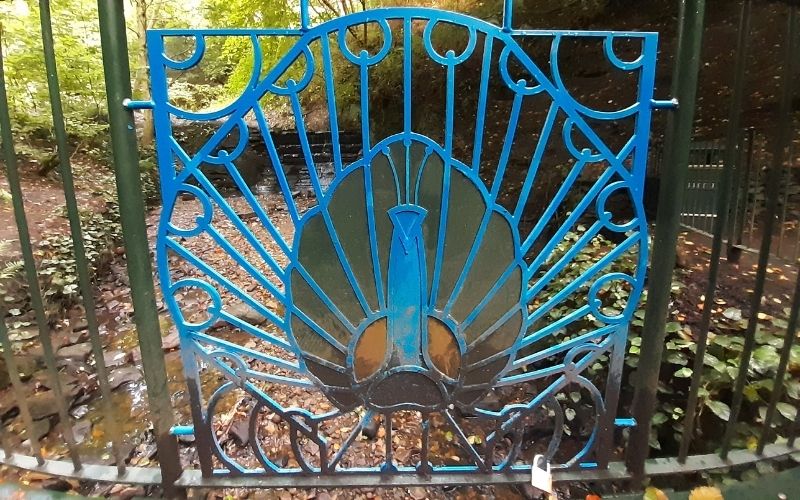 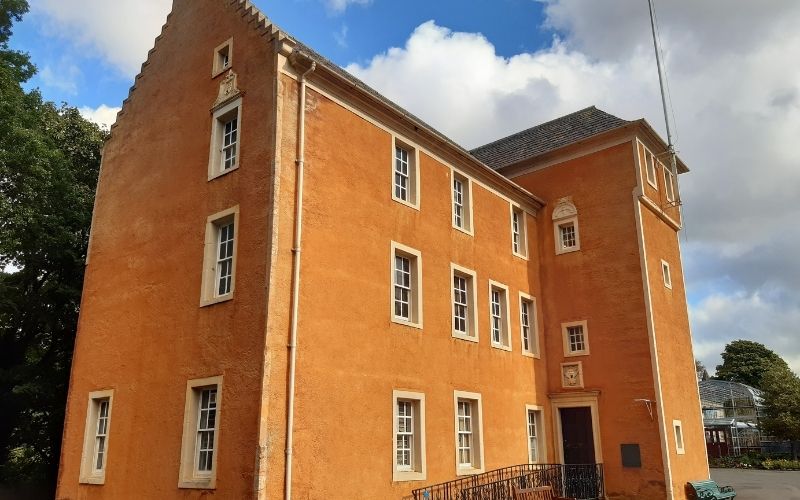 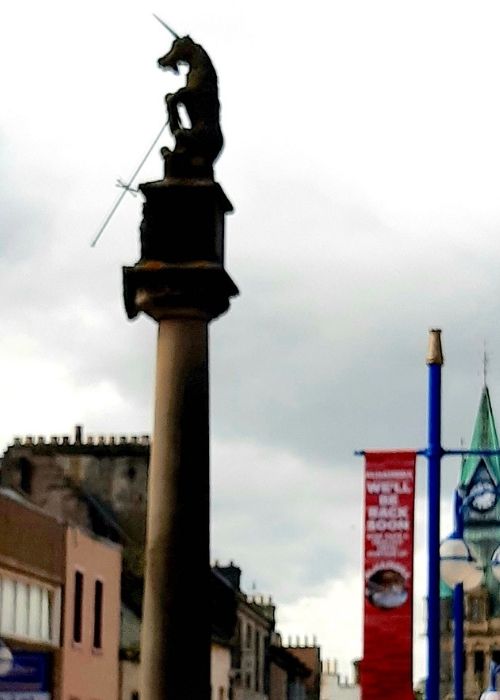 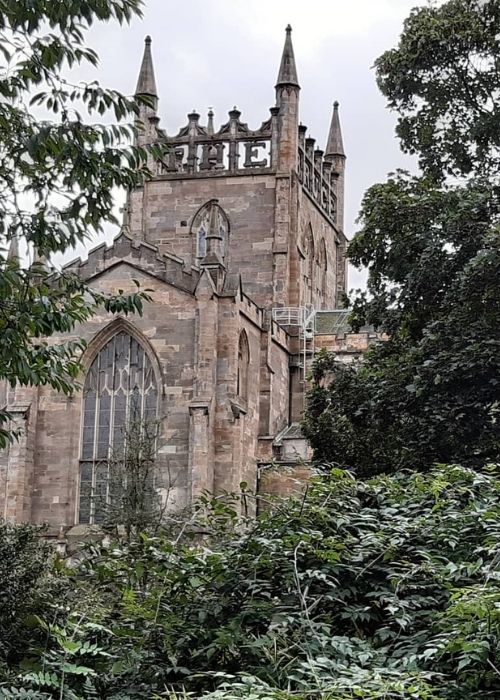 Dunfermline is only 40 minutes’ drive (an hour by bus/ 35 min by train) from the centre of Edinburgh. Just north of the Firth of Forth, it is often overlooked.  It has so much to offer with its history going back to the 11th century. For hundreds of years it had been a favourite residence for kings and queens.

The nave of the Norman Abbey Church is still standing – while the choir was built early 19th century and is home to Robert the Bruce’s tomb.

Your look may be drawn to the ruins of the 17th century Royal Palace. Here, Charles I was the last King to be born in Scotland.

Next door is Pittencrieff Park, gifted to the town by none less than Andrew Carnegie, famous son of the town. This is a large park with lawn, woodland, a deep gorge and walled garden – not to mention some historic buildings and play parks for the children. Truly a park for all the family and large enough to relax with a beautiful walk.

This is for you if your interests go beyond shopping in a small town – rather for the admirer of ingenious building techniques of days begone and the stories behind them. Find out more about the life of Andrew Carnegie.

We meet at the Mercat Cross across from the Guildhall and Linen Exchange.

Bus: From Edinburgh Bus station or Westend Queensferry Road get the Stagecoach Bus No 55X. Half hourly service . Get off at the Bus Station.

Alternatively, you can park your car at any of these public car parks

The walk takes in the historical landmarks of Dunfermline and we start with Abbey / Royal Palace (ruin) / Abbotshouse / City Chambers and continue into and through the Park with all its own attractions. We exit the park on the other side and visit the Andrew Carnegie Birthplace. There is no entry charge, but a small donation will be welcome. See the old hand loom and find out how Carnegie ended up in the States as a billionaire.

Thereafter we wind our way back to the mercat cross past a variety of interesting buildings.

From the mercat cross you may want to head back to the park or pay entrance fee to admire the Abbey and Palace a bit closer. 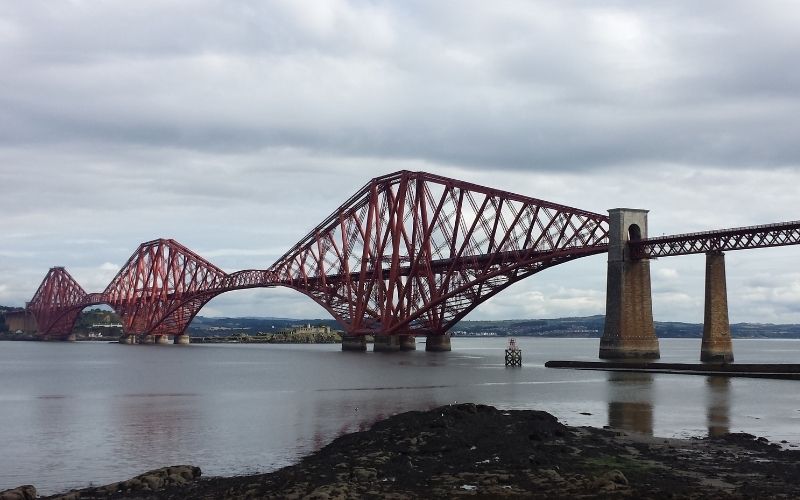 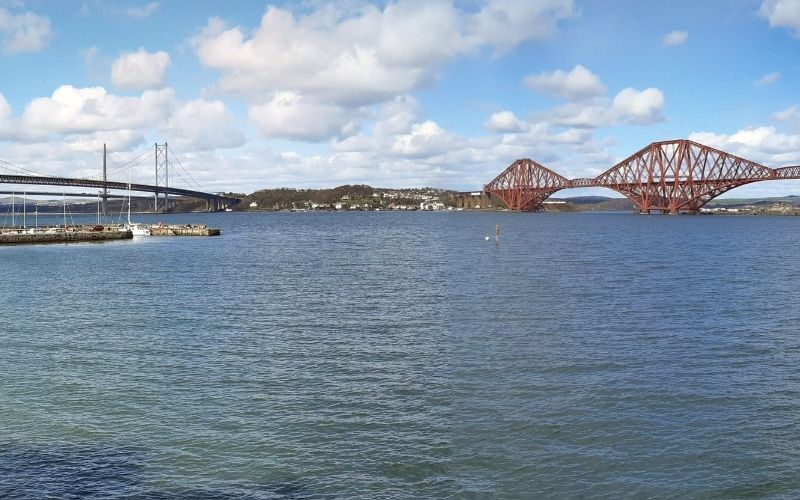 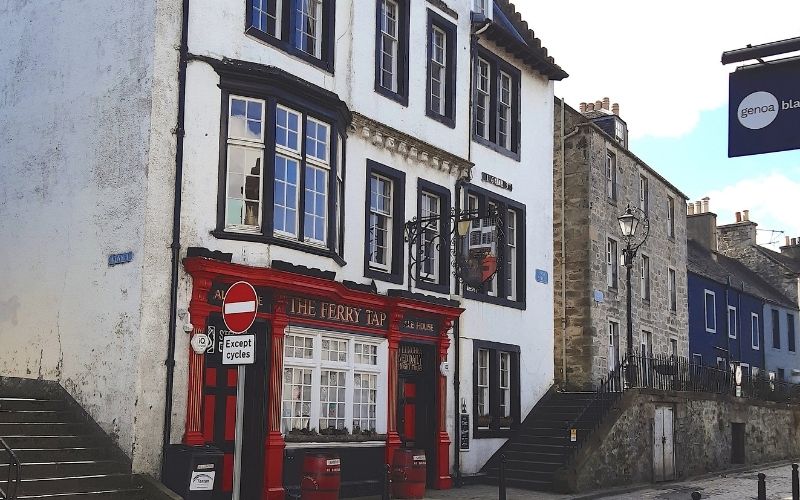 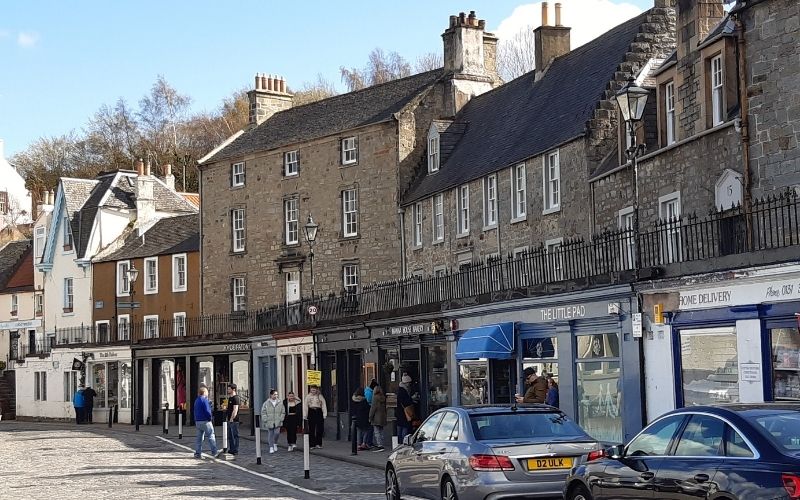 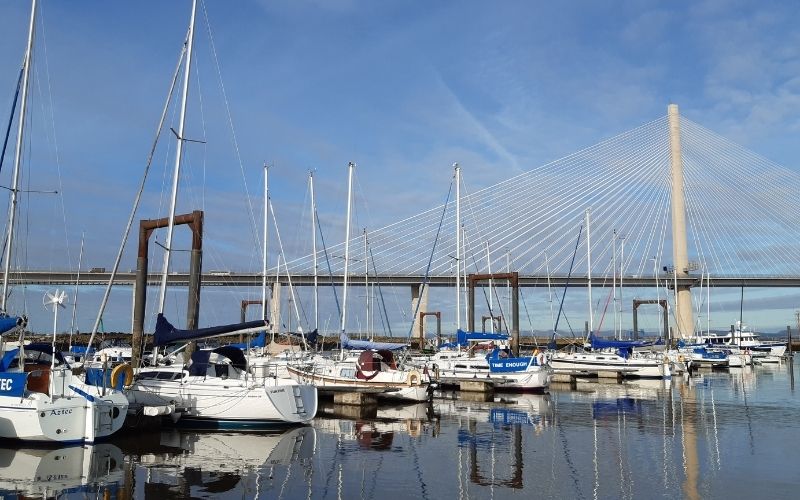 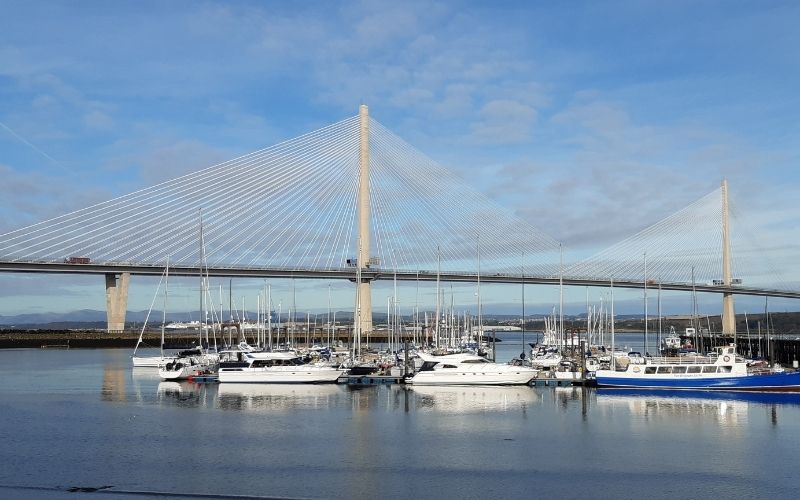 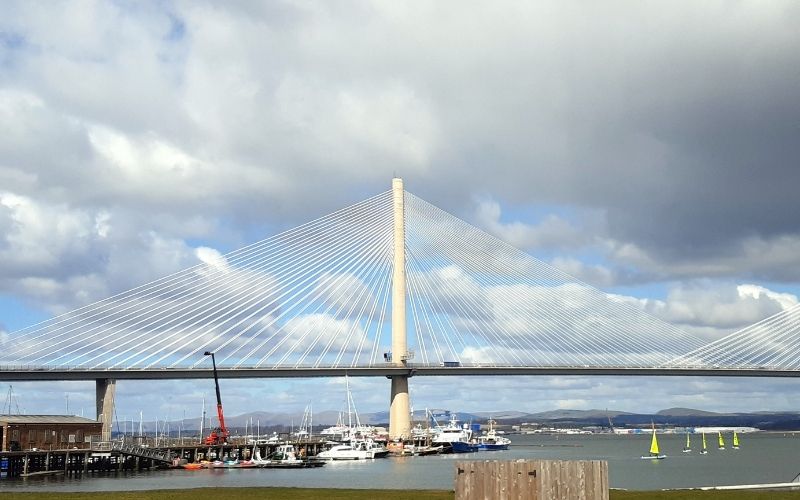 South Queensferry is the go-to place for great views, photos and artisan shops and cafes. The three bridges are unique, each one of them spanning well over a mile to connect Edinburgh on the shortest route north. All traffic used to go through the small town in order to access the ferry across the Firth until 1964. The Unesco World Heritage Forth Rail Bridge had opened in 1890 and is still the only rail connection on the east side across the Firth.

South Queensferry has long been a harbour and now has a marina and a small traditional harbour. The town itself is charming with some very old buildings and an interesting lay-out of its High Street.

This walk is for all those who just like a lovely walk combining seaside and harbours, narrow wynds and lovely artisan shops.

Make it a day trip and enjoy a peaceful walk along the beach and rocky coastline or enjoy strolling the street dotting in and out the numerous shops, cafes, restaurants and pubs.

From Edinburgh Centre get the bus no 43 to south Queensferry and get off at the Police Station. Alternatively, you can park your car at the public car park in Rose Lane, at the Port Edgar Marina or along Newhalls Road Promenade  and walk back to the bus stop.

After walking past the Port Edgar Marina and looping back, we make our way to the old harbour and carry on through the town – not without some detours. We end up at the pier where the Maid of the Forth leaves for its tour to the Inchcolm Abbey. It is right below the Forth Rail Bridge.

The unusually structured High Street (elevated pavements on the inland side of the street) adds to the unusual atmosphere of the place. Following the walk you may have some refreshments and then walk some more along the beach and rocky coastline or do a discovery stroll of all the artisan shops and cafes.

You may even want to come back for a pre-booked tour on the Maid of the Forth to Inchcolm Island to visit the old abbey there.

This walk is for those who are happy to just hop on a bus / take the car a few miles north of Edinburgh to enjoy seaside life.

If yachts, harbours, the sea air and an attractive small town with an array of shops, cafes and restaurants are your thing – you will feel at home here. It does offer an interesting collection of buildings to admire.

Interested in taking a tour? Get in touch today using the contact form below and select which tour location(s) you’d like to do. I’ll be in touch as soon as possible!

Find out more about other tour options I have available below! 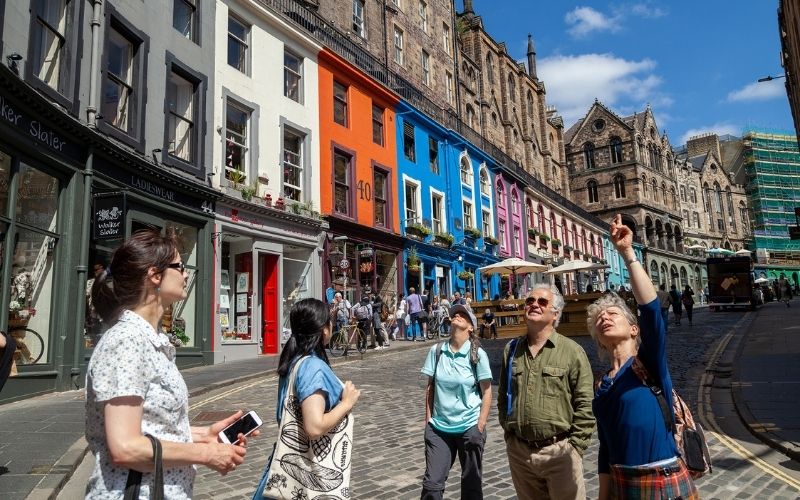 The only way to really get to know Edinburgh and its people is a guided walk tour in a small group. Get in touch if you are interested in a private tour or check out the set tour suggestions.

You need not travel far to feel totally removed from the big city – Dunfermline and South Queensferry are only a bus ride away from the centre of town. Combine a walk tour in a small group with time to
yourselves and make it a day trip. Find out more about the attraction of both to all ages by clicking below. 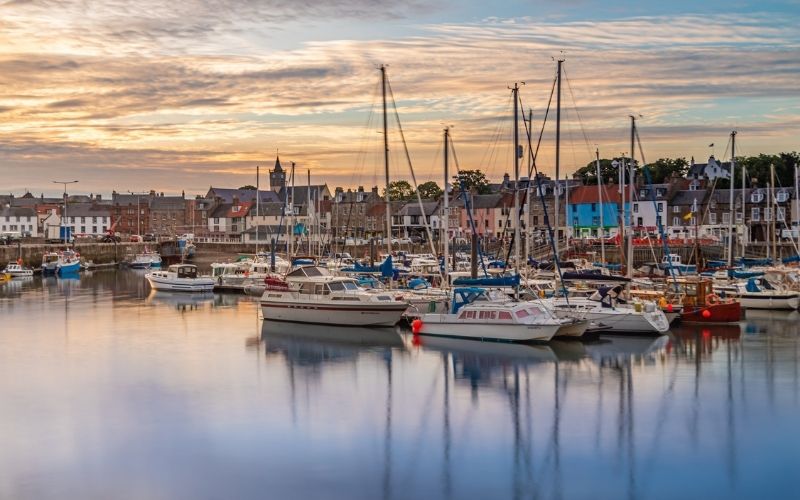 There are some great day trips from Edinburgh in all directions. I have selected five suggestions for you to contemplate. They each contain more than can be done in a day – so select your favourite bits, add a distillery if you wish. I will adapt to your ideas and make it a great day out for all. 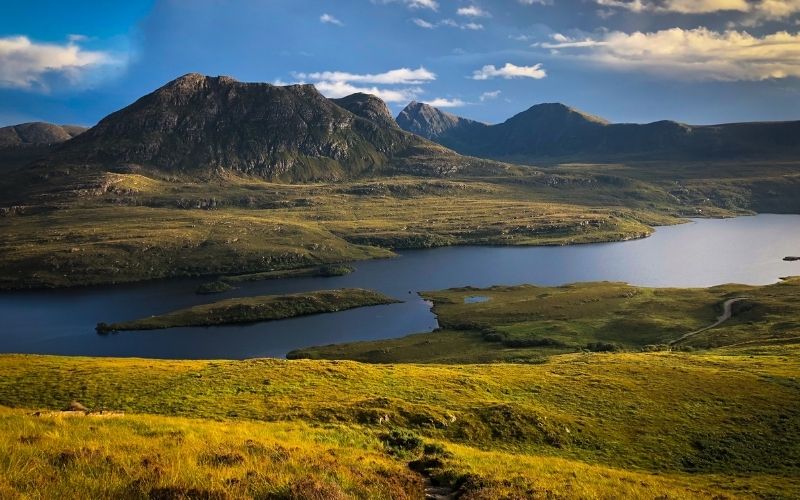 Planning for a tour of Scotland? This is my favourite page. It shows you a snapshot of places I have guided in the past. Including a few things to do in Scotland. Be inspired !

With Covid still around us, I follow the guidelines for walking tours of the Scottish Tourist Guides Association. You find the link to the guidelines here